On December 4, 2016, I completed my first marathon. This was a long time in the making, here’s my race report.

I had several reasons for doing this. The marathon was an event that, once a year, for most of my life, I’d decided to do. A few weeks or months after this decision, every year, I’d decide it was too much for my legs and that half marathons were enough.

Something changed this year. I’d been having pretty good results by increasing my mileage gradually since my surgery. The final decision for my was disappointment in my most recent half marathon (San Francisco, July 31 2016). More to the point, I was disappointed in being disappointed in race results. I was sick of chasing times that age and health issues have likely put in my past, and wanted a new challenge. Mainly, going further.

My training has been very good since I made the decision to do this race. My mileage has been low by marathon training standards, but I’ve reached several lifetime bests and I’ve been more consistent than ever before. Some of my bests:

Most of my training was on flat ground. I did all workouts and long runs on the SF Bay Trail (pictured above). I did 2-3 easy, short runs on either local roads or the treadmill per week. I also did my “short long” runs on the Sawyer Camp Trail, which is mostly rolling with a steep hill at the turnaround point. These runs were 10-12 miles. I hoped that these rolling hill runs would be enough for CIM.

I never really know how to evaluate my taper. I suspect that maybe three weeks was too long, but maybe not. I did screw up the first week of my taper. My previous week was a life time high 45 miles over 6 runs. Race minus 3 weeks was only 3 runs for 21 miles, which was too drastic.

Race minus two was better, at 26 miles with a strong 8 mile tempo on Monday.

I woke up on time, approximately 4am. I ate a banana and a Clif Bar, which is a bit more than a normal early AM run for me. I’d previously laid out my kit: 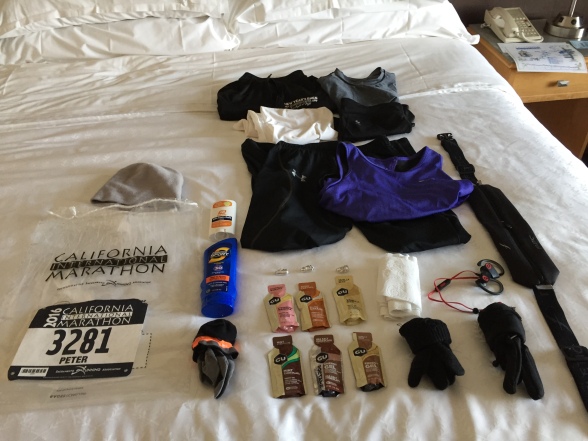 but was still not entirely sure what I’d wear. Most of my training was in warmer weather, including a long run at 85+ degrees. Race day was looking to start at approximately 40 degrees. In the end decided to go short tights, long compression top, singlet, heavier gloves and no hat. The only thing I’d change is using a short compression top.

I was on the bus by 5am. The last time I was on a bus like this, my head sat below the seat in front. I’m short at 5’6″ and this was slightly cramped. It must have been miserable for taller runners. This won’t come as a shock to experienced marathoners, but there is something very intimidating about a 30+ minute bus ride from the finish line to the start line, knowing I’ll need to get back to the finish on my own.

CIM really delivers with how they handle pre-race. Shuttles that runners can stay on until race time to keep warm, an expected but still awe inspiring line of port-0-potties, and a really well managed self seeded start line with tons of pace groups. I chose to start with what I thought was a conservative pace group.

No surprise to experienced runners, but this was easy. I frequently ran in front of the pace group, but never far enough that a brief slow down didn’t set it straight. Since this race is so heavily marketed to people trying to achieve Boston Marathon qualifying times (BQ), the areas around the pace groups were very crowded. This was weird for me, as this was the largest race I’ve never run. I’ve never felt crowded several miles into a race, but this was, though never enough to be a problem.

One thing that was a first for me during any race was to be running at easy effort. Even during a half marathon, it doesn’t take long for the pace to make itself felt.

As soon as the first 10 miles were over, I could tell it would be a tough race. This was mildly concerning, considering my pace wasn’t much faster than my 20 mile training runs and it was early. However, I chose to not adjust my pace accordingly. I knew today would be a painful lesson and accepted it. My pace started to drop off around mile 16, though only slightly.

For some reason, I thought it was one long, shallow uphill. However, the elevation profile does not bear this out. I had this same issue in my last half marathon as well.

This was really tough, mentally and physically. My pace slowed a bit more at mile 20, and from mile 22 significantly. From mile 22 on, it was a real question if I’d finish. This is also the area of the course that had much better crowd support, which was bizarrely very frustrating. Normally I’d appreciate it, but since my pace was off and my body was immune to adrenaline spikes from support, it was discouraging. By mile 24, I really wanted out. I knew if I walked at all, I likely would not run again, so was hesitant to do so. However, I took a 5-10 second pause to stretch and it was very helpful. Mile 25 and 26 were actually faster than the previous few because of it.

There was no sprint to the finish, hands in the air, wave to the camera here. I was in bad shape. One of my first thoughts was actually fear of what the next week would be like with the rocks in my quads and calfs. You can sort of see the pain in my face here:

I had originally booked my hotel room in Folsom, at the start line, but changed the reservation at the last minute to the host hotel in downtown Sacramento. This cost an extra $200, but was well worth it. Rather than wait for a 40 minute school bus ride back to the start, I was able to walk back to my hotel. This was difficult but likely very helpful, and well worth the upgrade.

I had three goals going into this race:

I would say I finished somewhere between 1 and 2. I’m uninjured (so far), I plan on doing another, but I would not call the race itself fun, as I was struggling to move my feet so much by the end.

CIM is a great race for first time marathoners. It is a bit of an expensive one night away from the Bay Area, but it was worth it to have a mostly flat, very well run marathon in perfect weather. It is *not* a big city race, and the scenery is not very interesting, so if those things are important to you, then find another race.

A few things I would do differently next time:

It’s hard to tell how much of my issues were related to specific mistakes versus just running longer than 20 miles, hard, for the first time.

Despite some of the downs, I’m extremely happy and proud to have finished something that I did not consider possible for the first 40+ years of my life and looking forward to having a better experience next time.